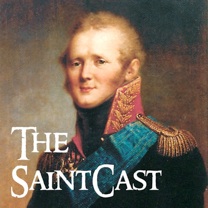 Fr. Seraphim Beshoner, star of Catholic Under the Hood, joins Paul “in the Hood” in Overland Park for a uStream recording of the SaintCast, discussing Russian Tsar Alexander I, reputed to be a saint in the Russian Orthodox Church.
Did the Russian emperor Tsar Alexander I fake his death in 1825, and spend the last years of his life as a holy monk in Tomsk, Siberia, as Feodor Kuzmich? Fr. Seraphim, a Russian historian, helps us understand the story in its historical context, discusses the recent book about the subject, and tells us what he believes of the legend.
• Imperial Legend, book on the Alexander/Kuzmich story
• Catholic Under the Hood Podcast
• Link to recorded uStream of this podcast
Subscribe to the feed | Subscribe with iTunes