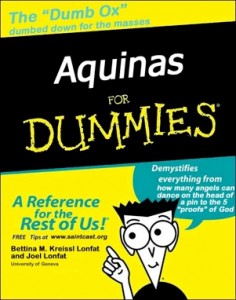 Do you understand Aquinas? OK. . I’m not the only one with that difficulty. But today on the SaintCast, two medieval philosophy scholars, Joel Lonfat and Bettina Kreissl-Lonfat tell us why he’s so important to the Church, what his major writings meant, who influenced him, and even take us through the Five Ways to come to know God’s existence.We also learn of the approval of a miracle in the cause of a Trappist monk, architect, and photographer from Spain, Blessed Brother Rafael. More on relics in the altar from Brazil, and why is St. Anthony the patron saint of lost objects? These topics and more on today’s SaintCast.

* Bettina and Joel’s website
* Books on Aquinas by Kenny and Torrell, Torrell on the Summa
* Patron Saint of diabetics, St. Paulina of the Agonizing Heart of Jesus