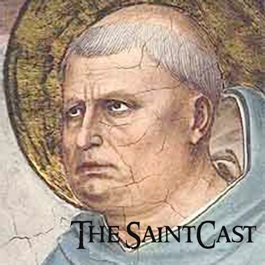 High on a rocky ledge in what was once the kingdom of Sicily, this cousin of the emperor Frederick II contemplated his future while a prisoner in his own family’s castle. Who would have though that he would come to be recognized as one of the greatest minds of the Catholic Church. . .

The quiet demeanor of this humble giant of a man led others to believe he was a dunce. But Aquinas’s theology and writings were anything but simple. Tune in to hear the life story of “the Angelic Doctor” of the Catholic Church, author of some of the Church’s most beloved hymns, and perhaps the greatest theologian in the history of Christianity.

Try your hand at this week’s St. Jeopardy quiz, and win a T-shirt. Feedback and more.