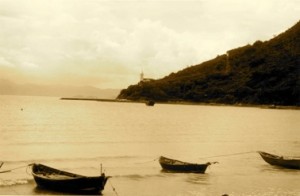 He died nearly alone, on tiny Sancian island, within sight of China – only 10 km from the land of his life’s dream. His dream. . to evangelize the East. On today’s podcast we explore the life and work of Francis Xavier, directly responsible for baptizing the most converts since St. Paul. [More…] We know much about Xavier from his touching letters, and the letters of those around him. A carefree college kid in Paris, he had a conversion experience that led him, along with Ignatius Loyola, to found the Jesuits. Steadfastly obedient to his mission, he traveled to India, Japan, and Indonesia, and almost to China to bring the message of Christianity to thousands. He is widely credited with changing the way Christians evangelized by using the culture and ways of indiginous peoples to introduce Christianity.

Try your hand at this week’s St. Jeopardy quiz, and win a T-shirt.