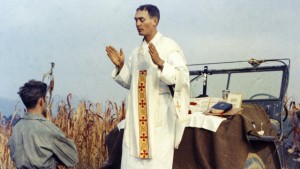 The SaintCast is pleased to announce a very special celebration. Come celebrate Mass with us Saturday evening, August 1st, 2015 at Camp Tekakwitha at the Prairie Star Ranch in honor of Servant of God Fr. Emil Kapaun, who celebrated Mass on the hood of his jeep in the Korean War. Celebrant will be military chaplain Fr. Peter Jaramillo. Concelebrants include Father Anthony Oullette and Father Jerry Spencer, among others.  The Mass will begin at 7:15 PM.

See the official announcement on the Archdiocese of Kansas City in Kansas website for last minute details.Fr. Kapaun died in a lice-infested, icy-cold North Korean prison camp on the Yalu River on May 23, 1951, shortly after his 35th birthday. Awarded the Medal of Honor, the highest US military decoration awarded to a member of the armed forces for bravery in combat, as a POW Fr. Kapaun saved lives, and cared for his wounded and captured American brothers more than himself, encouraging everyone to hold on and to have faith in God, when dying was an easy alternative.

His Cause for canonization has been introduced in Rome.  Join with hundreds of Archdiocesan youth, Liaison military officers of the Republic of Korea, members of the Korean American community, Korean War veterans, Boy Scouts, representatives from Father Kapaun’s Cause for Canonization, representatives of Fr. Kapaun’s Shrine and Boyhood home from Pilsen, Kansas, and many others to celebrate Mass as a faith community, and honor the heroic sacrifice of Fr. Kapaun.